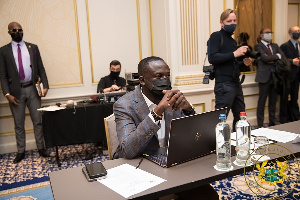 The court however granted her one house and some vehicles

The marriage between Director of Communications at the Presidency, Eugene Arhin and his estranged wife Gloria Assan is officially over.

A report by Daily Guide News Online cited by GhanaWeb states that the marriage was annulled by the Divorce and Matrimonial division of the Accra High Court.

The court presided over by Justice Cecilia Don-Chebe Agbevey granted some properties to Gloria Assan though it falls short of the numerous of properties she requested.

The court instructed Eugene Arhin to pay a lump sum of GHC100,000 to his former wife. She also won the rights to a five-bedroom uncompleted house in the Kpone Katamanso district.

Per the judgment, the properties and financial obligations imposed on Eugene Arhin are exactly what Gloria Assan requested before the High Court.

What Gloria Assan requested in her suit

i. That the said marriage be dissolved.

ii. That the Petitioner be granted custody of the three children of the marriage, with access to the Respondent.

iii. That the five (5) bedroom residential house situate at Kpone Katamanso (Santoe District) be settled in favour of the Petitioner.

v. That the Respondent be ordered to pay the Petitioner the sum of GHC2Million

vi. An order for the Respondent to maintain the children, pay the school fees and health bills of the children of the marriage.

vii. That the Respondent be ordered to pay costs of and incidental to this suit.

We may not achieve zero hunger by 2030 – First Lady