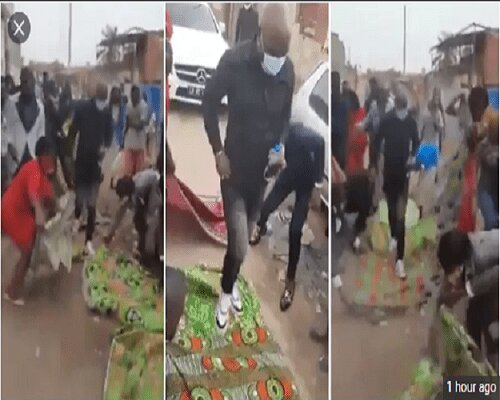 A video is circulating on social media showing the moment some church members were captured spreading their clothes on the ground while their Prophet was walking on it.

In the video footage, the prophet had just stepped out of his clean white Benz and members of his congregation decided to reenact the Jesus Christ’s triumphant entry into Jerusalem where palm fronds were laid on the ground by Jews to welcome him.

The event reportedly happened in South Africa. Both male and females were seen shouting and spreading clothes on the ground while the Prophet was majestically walking on it till he entered the church building.

It sparked controversial debate and opinion peddling as some said a true man of God will never do such, that even the Bible warned against false Prophets on the last days.

Meanwhile, a video of faithfuls beating the devil and his demons using sticks as instructed by their Pastor has set tongues wagging on social media.

Armed with sticks, they went to an open filed and started beating ‘the devil and his demons’ as instructed by their pastor while chanting prayers… Continue reading

VIDEO: How Ghanaian romance scammer duped British granny of her £18,000, sex, others

VIDEO: Fameye,Others shocked after a Guy erected whilst taking photo with female friends