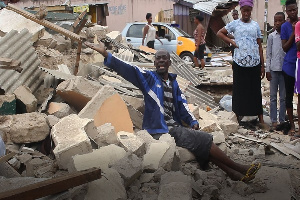 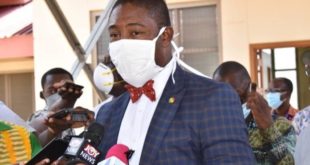 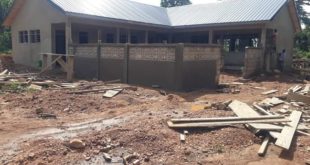 Residents at Mamobi in Accra have vowed to boycott the upcoming 2020 general elections if government does not come to their aid. Their cries come after a mass demolition exercise by the Accra Metropolitan Assembly Tuesday, July 30, 2019, that saw scores lose their properties and homes.

According to displaced residents, authorities only gave them a three-day prior notice on Friday, July 27, 2019 and a subsequent reminder on Sunday, July 28, 2019. They say the short notice could not afford them the luxury of time to pack out of their structures.

“They gave us only three days to pack out of our structures, only three days. How do they expect us to get rooms to rent in three days?” A victim questioned. “There are thieves around stealing from the ruins as well. Very soon no one would go out to vote for any politician again, no one. We don’t want any president or Member of Parliament again, we are tired of their promises, no one helps us after we vote for them.” He lamented.

Another victim added that “government must do something about this, we have nowhere to go or else we have decided to boycott 2020 elections because voting is useless to us now.”

Speaking to Ghanaweb, residents narrated that, the demolition exercise began around 3 am at dawn and no amount of supplication stopped the officers who came around with armed policemen from discontinuing the process.

A victim said, “We were all here on Friday when they came to serve us notice but we were expecting them to at least give us a month to sort ourselves out…but that didn’t happen, they came here at dawn around 3 am to destroy all we have. We have nowhere to go, government should help us.”

A tour at the demolition site saw massive destruction of properties. However, no life was lost in the process.

Victims were seen trying to salvage some good out of their destructed properties whilst others stood by helpless, lamenting their loss and the “unfair treatment.” They questioned why the Accra Metropolitan Assembly would for several years look on while accepting payments of land and other related taxes.

In their narration, they mentioned that they were promised compensation, but no one has so far heard or received any form of compensation from authorities.

A neighbourhood church was also demolished in the process.

Meanwhile, residents have alleged that the demolition exercise is to make way for the construction of a new Assembly office.