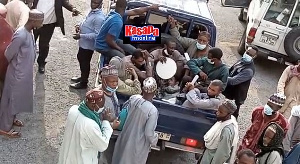 The Koforidua Circuit Court ‘B’ Presided by Her Honour Mercy Adei-Kotei has admitted bailing all 26 accused herdsmen arrested by the Anti-Armed Robbery taskforce in possession of arms and ammunition at Donkorkrom in Afram Plains North District in Eastern Region.

The accused persons were provisionally charged with seven counts but only the charge of Unlawful Assembly was relied on as Prosecution admitted errors in other charges which will be amended.

The facts of the matter presented by the Prosecuting officer Kwasi Opare Wiredu, a State Attorney are that on August 29, 2021, at about 1:00 pm, the Anti Robbery operational team at Donkorkrom led by DSP Lovelace Kofi Glago in a joint exercise with personnel from the Donkorkrom Division and District upon tip-off intercepted and arrested the suspects who had attempted to escape.

A search was extended to the rooms of suspect Iddrisu Sambo and Issaka Ali at Donkorkrom Zongo and at one of the rooms of Idrissu Sambo which twelve (12) BB cartridges were found.

None of the accused persons was able to produce documents on the weapons and ammunition.

The prosecution, therefore, prayed the court to remand the accused persons to enable the police to complete the investigation.

The defence counsel Lawyer Alex Gyamfi argued that a child member of the Fulani community was kidnapped which the family reported the Fulani Chief who is the first accused person -Sarki Iddrisu Sambo who also lodged a formal complaint at Donkorkrom Divisional Police command.

While on their way to the police station to join the police to rescue the victim, the Anti Armed robbery taskforce arrested them.

The court heard the defence counsel and granted a bail sum of Ghc100,000 with two sureties each.

One of the accused persons collapsed in court and was rushed to the hospital.