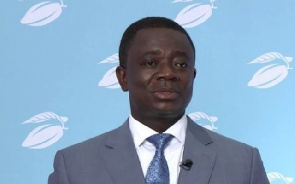 Seidu Agongo, the businessman accused of fraudulently selling substandard fertiliser to the Ghana Cocoa Board (COCOBOD), with the alleged assistance of Dr Stephen Kwabena Opuni, a former Chief Executive of COCOBOD, has failed to halt his trial at the Accra High Court.

In a ruling yesterday, the court, presided over by Mr Justice Clemence Honyenuga, dismissed an application for stay of proceedings filed by lawyers of the businessman.

Agongo was seeking to halt proceedings, pending the final determination of his appeal at the Court of Appeal where he is challenging the refusal of the High Court to admit a document that the High Court ruled was wrongfully tendered in evidence.

The court held that Agongo’s lawyers failed to present any exceptional circumstances, as stipulated by law, for which proceedings should be halted.

“I fail to see any special grounds to stay proceedings. The grant for stay of proceedings will occasion further delay of the trial.

Why the application for stay of proceedings

On February 25, this year, Mr Justice Honyenuga rejected the tendering of a document by the lead counsel of Agongo, Mr Benson Nutsukpui, through the second prosecution witness, Dr Alfred Arthur, a soil scientist at the Cocoa Research Institute of Ghana (CRIG).

The said document was the report of a committee set up by CRIG and the Cocoa Health and Extension Division (CHED), both of COCOBOD, on the disappearance of some documents ordered to be released by the court on behalf of Agongo.

Mr Justice Honyenuga, in rejecting the tendering of the report as evidence, ruled that it was wrong for the defence to tender the report through Dr Arthur, who was not the author or had no knowledge about it.

Rather, the judge, who is a Justice of the Court of Appeal, with additional responsibility as a Justice of the High Court, was of the view that the right thing was for the defence to apply to the court to subpoena the members of the committee for them to appear before the court and speak to the report.

Dissatisfied with the ruling, Agongo’s lawyers filed an interlocutory appeal at the Court of Appeal and, based on that, they filed for a stay of proceedings at the High Court.

Making a case for the application, Mr Nutsukpui argued that the court, by rejecting the tendering of the report as evidence, had deprived his client of his constitutional right to a fair trial.

According to him, the position of the court that the accused should subpoena the authors of the report showed that it had already decided that the accused would definitely open his defence.
Such a move, he argued, meant that the right of the accused to make a submission of ‘no case’ had been curtailed.

“This is a very serious exceptional circumstance which will occasion serious miscarriage of justice to the accused persons,” he argued.

In her response, a Senior State Attorney, Ms Stella Ohene Appiah, opposed the application and urged the court to dismiss it.

She argued that the argument by the defence of being denied to make a submission of ‘no case’ was not plausible because it was premature, nor had the court denied the defence that opportunity.

“This is nothing but a calculated attempt to delay proceedings and waste the time of the court,” she submitted.

The court agreed with the prosecution, dismissed the application and adjourned the trial to March 27, 2019.

In March 2018, the Attorney-General (A-G) charged Opuni and Agongo with 27 counts for allegedly engaging in illegalities that caused financial loss of GH¢271.3 million to the state and led to the distribution of substandard fertiliser to cocoa farmers.

It is the case of the A-G that Dr Opuni, during his tenure as COCOBOD CEO (from November 2013 to January 2017), breached laid down procedures in procurement and other laws that caused the state to lose GH¢271.3 million in the alleged fertiliser scandal.

Agongo is alleged to have used fraudulent means to sell substandard fertiliser to COCOBOD for onward distribution to cocoa farmers.

The two accused persons have denied any wrongdoing and have pleaded not guilty to all the 27 charges.
They are currently on bail in the sum of GH¢300,000 each.