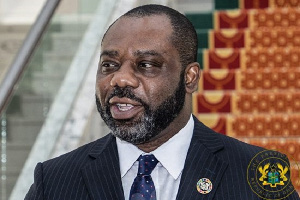 Nearly two months ago, Ghana’s Education Minister, Dr. Matthew Opoku Prempeh upon taking a second test for the novel Coronavirus, confirmed positive and was put under isolation for treatment at the University of Ghana Medical Centre (UGMC), after which he recovered weeks later.

Weeks after coming out of isolation, the Minister has opened up to Happy FM’s Samuel Eshun on the Happy Morning Show about his Coronavirus experience, saying that testing positive for the virus gave him the opportunity to identify his true friends.

“I wasn’t really answering my phone so at times, I would see some people calling but because I was not well, I ignored most of these calls. Some sent text messages and others sent WhatsApp messages”, he said.

Dr. Opoku Prempeh sharing the painful part of his experience said, “Some people were also praying and saying that it will not end well with me. For other people, instead of sending me texts to ask how I’m doing, they text me asking if I’m not yet dead”.

According to him, this is the reason why he decided to issue a press statement to confirm his ill condition following the many posts and articles flying all over masking all sorts of comments and giving predicaments about his condition.