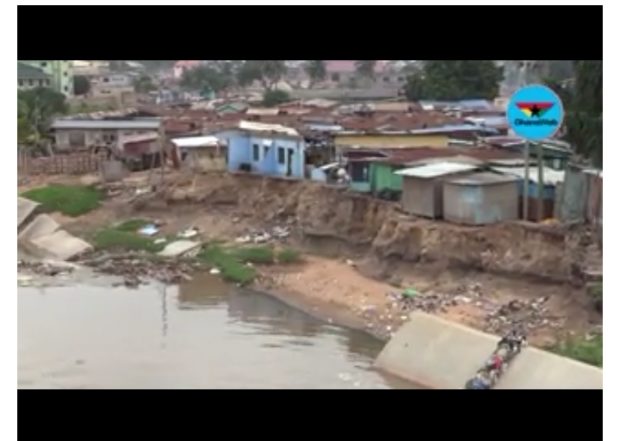 • Some drains in the area are filled with waste

The rains are in and even though it is in the unlikely circumstances because ordinarily, September isn’t a month that falls within the rainy season, climate change has easily taken the blame for what has become this new normal.

As unpredictable as the weather has become, there are also concerns about drainage and how prepared the country is for the rains particularly because of the history of floods and how devastating they have been in the country.

In places like Accra, the perennial challenges with flooding and the displacement of people are also very much of concern, but how much of a role are the citizens playing in all of these?

On a recent assignment in the capital city, the lenses of GhanaWeb TV captured what appears to be a ticking danger for some squatters living just along the old Achimota overhead.

Mostly wooden structures, the continuous erosion of the edges of the main storm drain that connects from the overhead, towards the new Achimota station, and largely the entire Achimota area, has left those shacks at the mercy of the weather.

Heavy floods could just sweep into the shops and homes of some of these residents, perhaps actually carry the wooden structures with it.

And as our lenses captured what could just be a looming disaster, we could not also help but capture how much debris has been dumped in the drains.

Source: www.ghanaweb.com
Related Topics:ACHIMOTADANGER
Up Next