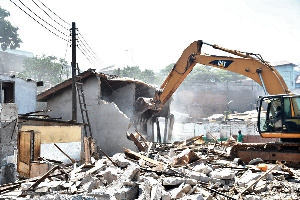 A church at Dansoman has been accused of demolishing the house of a physically challenged man, prompting the man to appeal to the government and Ghanaians to intervene in his case.

The victim, Benjamin Thompson, according to adomonline.com, said he got deformed after he was involved in an accident some years ago.

Narrating how things turned out for him, he told the portal that after the accident and with no surgery able to help him get back to a normal life, even after visiting several hospitals in the country, he started saving up and acquired a land costing GH¢450,000.

With additional money from his insurance company, he put up a three-bedroom house with his insurance money while starving his family, just so he could give them a place to lay their heads.

“After the accident, I tried all I could just to make sure I get my surgery done on my arms but after every surgery, doctors told me my broken arm cannot be done. It was a very painful moment for me because I won’t be able to take care of my wife and kids in this condition,” he explained.

The report added that unfortunately when he had travelled to Winneba one Saturday to seek medical care, he got called and was informed that his building had been demolished.

Prior to the demolition, he explained that some police officers and a man he did not know stormed the premises and asked that he accompanied them to the police headquarters.

“When we got to the regional head office, they started asking me how I acquired the land to build and I told them I built the house through my insurance money.

“Some people even came to me to ask that I give them the land and I told them it was given to me rightfully and I refused and I made sure I had no qualms with anyone. So I kept my documents and everything,” he said.

The narration continued that some officers from State Housing called him to bring a processing fee after which he handed over documents to them but since then, he has not heard from them.

“I was at Winneba when the call came that some pastors from Christ Apostolic Church and police officers in patrol car had stormed the building and started demolishing the building saying they want to build a church.

“How can a church do this to me, a physically challenged man? I met about five police officers destroying my property and they never said anything to me as I watch my property destroyed. I even collapsed upon seeing that,” he said.

He explained that since then, no one has told him anything about the matter, especially leaders of Christ Apostolic at Dansoman, rendering him homeless.

This situation, he added, has forced him to vow never to go to church again, unless perhaps the government comes to his aid.

Source: www.ghanaweb.com
Related Topics:Dansoman
Up Next