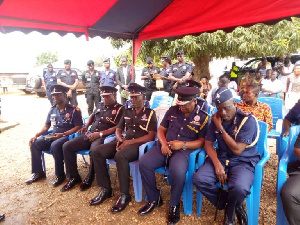 It has emerged that the Police Officer found dead on duty with a gunshot wound at Akyem Swedru in the Eastern Region was depressed after he was diagnosed with diabetes.

The widow, Aisha Asare, popularly known as Twumwaa Angelina on Wednesday, August 21, 2019 told the media after the visit of the Acting Inspector General of Police, James Oppong Boanuh and his entourage that even though her deceased husband was deeply worried over his ill health, she kept psyching and encouraging him that he will be fine.

“He was okay until he was diagnosed with diabetes at the Hospital when I took him thereafter complaining of not feeling well. So since he was informed of having high blood sugar level, he has been depressed. Always thinking about it but I kept encouraging him. He left home[Monday Night] but didn’t return when I heard his passing, I initially thought he suddenly fell ill and died only to know they shot my husband. She appealed for support of the public and Police to help her take care of his two children- eight and five-year-old boys.

Lance Corporal Alhassan Asare who was with the Akyem Oda Divisional Command was found dead Tuesday dawn at Dukes Filling station at Akim Swedru where he was on night guard duty.

He was found dead in a pool of blood in a plastic chair with suspected gunshot wounds on the forehead while his rifle between his thighs was pointing upwards.

It is not clear if it was accidental discharge or Suicide.

The acting IGP, Mr. James Oppong-Boanuh and some members of the Police Management Board, COP/Dr. George Akufo Dampare, COP Mr. Christian Tetteh Yohunu, together with the Eastern Regional Police Commander COP Mr. Adu Amankwah on Wednesday visited the crime scene, interacted with local Police personnel and subsequently the bereaved family to commiserate with the wife and two children.

The IGP has assured the family of support and speedy investigation into the cause of death and circumstances leading to the death.

Previous Mahama Is A “Terror” To Free SHS – Wontumi
Next A/R: 4 arrested over cop’s murder