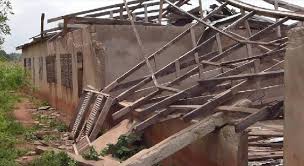 Authorities of Dimango D/A Primary School in the Nkoranza South Municipality of the Bono East Region have bemoaned how their struggles with inadequate infrastructure over a long period of time.

This according to them has affected academic work a great deal.

The school which serves three farming communities, Dimango, Kramokrom, and Womaase has been captured in a deplorable state.

Two of the three-unit classroom blocks have had their roofing sheets ripped off eight months ago and have since not witnessed any rehabilitation works.

To curb the situation, authorities have merged some of the classes to accommodate all pupils.

The remaining pupils have had to study under trees, a situation that disrupts teaching and learning whenever there is a downpour.

Residents in the community say the problems facing the school are hampering effective academic work as pupils do not learn in a conducive environment.

“The school has many challenges. As you can see, they don’t have classrooms so many of the classes are combined. Others too sit under trees, a problem that affects learning whenever it rains,” a resident lamented.

Speaking on the matter, the Assembly Member for the Ayerede Electoral Area, Charles Boakye revealed that academic work has been seriously affected as a result of the problems facing the school.

According to him, pupils are compelled to carry “kitchen stools” from their respective homes to school as the school lacks adequate furniture to cater to all pupils.

“The school in this community lacks furniture; therefore, pupils have to bring their own chairs from the house. The situation is very serious as pupils find it difficult to write during classes’ hours”.

Source: www.ghanaweb.com
Related Topics:DimangoINFRASTRUCTURE
Up Next