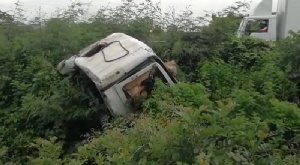 • A driver of a trailer is feared dead

There are fears a driver of a trailer on the Tema-Accra Motorway has died after his car skidded off the road and into a ditch.

According to a citinewsroom.com story, the driver’s conductor (mate) is currently battling for his life at the Tema General Hospital.

The accident, involving the trailer with registration number GN 3161-09 is said to have happened on Friday evening at about 10:00 pm.

Carrying crates of empty beer bottles, the trailer is reported to have landed in a major storm drain near the Adjei Kojo underpass on the motorway, adding to the numbers recorded daily on that road for accidents.

Being the major link between Accra and Tema, the Motorway has continued to see many accidents, many of which have been blamed on such things as the bad nature of the road, the poor lighting on it and reckless driving.

May Obiri Yeboah, the Director-General of the National Road Safety Authority (NRSA) recently disclosed that road crashed have killed more than 1000 people in the country just between January and April this year.

Source: www.ghanaweb.com
Related Topics:driverTEMA
Up Next