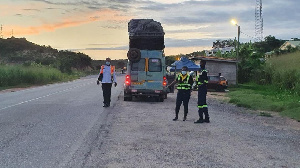 Drivers plying the Accra-Takoradi highway with unprescribed and excessive lamps affixed on their vehicles had them removed or disconnected by officers of the National Road Safety Authority (NRSA) in the Central Region on Thursday evening.

The exercise, according to the NRSA is a coordinated effort to ensure full compliance of Regulation 65 of the Road Traffic Regulation, 2012 (L.I 2180).

Regulation 65 among other things, required vehicles or trailers to be equipped with electric lighted lamps or other kind approved by the Licensing Authority.

It further states that the vehicles may be fitted with additional one or two auxiliary flood lamps and indicates that a driving lamp is placed in a manner that allowed the lamp to project above the bottom of the frame of the windscreen.

The enforcement exercise was carried out in collaboration with the Police Motor Traffic and Transport Department (MTTD), Driver and Vehicle Licensing Authority (DVLA), Transport Operators and other road safety agencies.

The officers took the opportunity to educate and sensitize drivers on the need to stick to the prescribed lights and the need to adhere to road traffic regulations.

Though the NRSA did not face strong resistance from the drivers, some of them demanded that the removed lights be given to them, but the NRSA refused, insisting that they could fixed them again, which did not go down well with some of the drivers.

Ms. Linda Affotey-Annang, Regional Head of the NRSA, advised drivers and vehicle owners to voluntarily comply with the new regulation by removing all the unapproved lights from their vehicles to avoid being prosecuted.

The penalty for using unprescribed lamps is a fine of not exceeding fifty (50) penalty unit (GHC600) or a term of imprisonment not exceeding three months or both.

Ms. Affotey-Annag described the enforcement exercise as successful and said it would be carried out on a weekly basis with random checks alongside sensitization and education till the end of the year.

She underscored the importance of the exercise and said the practice of using those unapproved lights blinded drivers and exposed other road users to the threat of crashes that occurred especially at night.

She explained that the Regulation required a vehicle to have two factory lamps in front with one on each side and placed in a manner that showed a white or yellow visible light within prescribed distance and to indicate the width of the vehicle.

Ms. Affotey-Annag added that though a maximum of four driving and flood lamps were allowed, the electrical switching must be arranged to allow the use of only two of those lamps at a time.

However, she noted that many vehicles especially heavy-duty vehicles had excessive headlights on the roofs and switched on at the same time.

Some of the drivers who had their lamps removed said they were unaware of such law and called on the NRSA and other road safety agencies to intensify their education.

They also complained about the lack of streets lights on the road and indicated that the extra lights aided them to see better on the road.

Ambulances breaking down due to poor roads – NAS