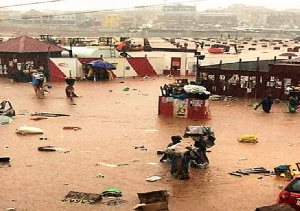 Residents of Nyamekrom, a community in the New Juaben South Municipality of the Eastern Region, are counting their losses after their homes and shops were flooded after a downpour on 20th October 2021.

Property worth thousands of Ghana Cedis were destroyed as about 60 houses submerged, following a 3-hour rain.

Residents have blamed the flooding on the construction of a bridge in the community, which had taken too long to complete, and therefore urged the authorities to ensure its completion early to prevent future occurrences.

A victim, Sakina Boakyewaa said, they had reported the incident to the Member of Parliament for New Juaben South, Michael Okyere Baafi, and Officials of the National Disaster Management Organisation (NADMO) to help address the problem.

She disclosed that they had resided in the area for about 6 years, but had never experienced flooding of that magnitude. A former Assembly Member for the area, Samuel Amoako Danso said, the only solution to the problem is the early completion of the bridge.

When contacted, the Assembly Member for the area, Enoch Boahen said, the culverts on the bridge can no longer contain the volume of water and must therefore be widened by the contractor to prevent flooding in future.