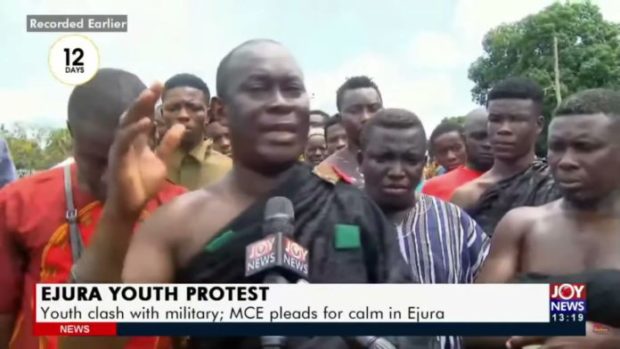 According to him, the committee was not made up of magicians and that was why they invited witnesses to testify before it.

Speaking on Adom FM’s Dwaso Nsem, Nana Obugyei II said he believes the report was based on the testimonies given before the committee.

The Ejura Committee report, which was released on Monday, among other things, recommended that the affected persons and families be compensated.

The committee also recommended the construction of a recreational facility for the youth and the transfer of the police commander, DSP Philip Kojo Hammond.

In the Kontihene’s view, the recreational facility and compensations were a step in the right direction but the transfer was a bit harsh.

“If the committee finds it worthy for the victims to be compensated, we welcome the decision but for the commander, I see it to be harsh since there is no bad blood between him and the residents.

“It was a joint operation and the DSP alone cannot take the blame but I cannot fight the committee on its recommendations. If the government brought him and they now want to send him away, I cannot stop that,” he stated.

The Krontihene explained the traditional council will sit to analyse the report extensively and make their views public in the coming days.

The committee concluded that the late Kaaka’s activism cannot be linked to his death but could be more likely be linked to a family feud but the family has described it as factual inaccuracies.

SAD VIDEO: Ambulance conveying patient gets stuck in the mud on bad road