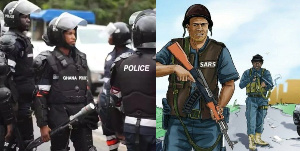 The Ghana Police Service appears to have won the hearts of netizens on Twitter over how they are very professional in the way they go about their duties.

The praises come on the back of wide protests in many African countries, especially Nigeria regarding the poor relations between the citizens and the security forces.

In the last couple of days, Nigerians have been protesting against their police force over brutalities against the citizens.

This praise for the Ghana police came after a video had gone viral of a man allegedly being killed by the force’s Special Anti-Robbery Squad (SARS).

SARS is a branch of the Nigerian police under the Criminal Investigations Department (CID) instituted to stem crime.

The protest dubbed #EndSARSNow was started online by some Nigerians indigenes including celebrities sharing their own horrifying experience under SARS.

Some claim the SARS, which is supposed to fight robbery, kidnapping and violent clashes in the country, had turned to abuse citizens rather than to protect them.

The twist to favour Ghana came when a Nigerian immigrant (in Ghana) shared an experience on Twitter about her encounter with the Ghana Police Service, which resonated with a lot of Twitter users especially foreigners, who then called for such professionalism to be emulated in the Federal Republic of Nigeria.

Adedoyin Debbie, the Nigerian immigrant wrote on Twitter: “No jokes, the first time I saw Ghana Police and they stopped us on our way back to our Airbnb apartment around 2am, they were so polite. I was asleep and the Police woke me up to be sure that I wasn’t kidnapped or something, after he confirmed, he let us go. I felt safe in Ghana.”

She continued: “I have never felt safe in Nigeria, I am always scared of the cops because they are rude, uncouth, could kill you, extort money from you. They are everything worse, the Police itself needs to be REFORMED, but for not ENDSARS”.

The tweet from Adedoyin Debbie has made the Ghana Police Service trend on Twitter for a while with some users sharing similar experiences they encountered with the police.

Read below some of the tweets about the Ghana Police Service.