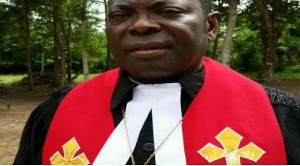 He died on Saturday, October 10 at the Ho Teaching Hospital, where he was admitted for a short illness.

He was elected in August 2014 and inducted into office on 11th January 2015 as the 13th Moderator of the Church, to serve a six-year term.

Rt. Rev. Dr Agidi’s tenure in office was to end on December 13, 2020 for Rev Lt Col Dr Bliss Divine Agbeko to take over.

#EndSARSNow: How Ghana Police has won the heart of netizens with their professionalism