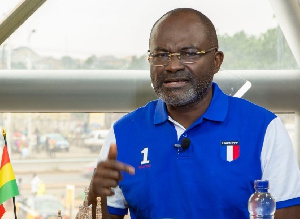 Member of Parliament for Assin Central, Kennedy Ohene Agyapong wants the government of Nana Addo Dankwa Akufo-Addo to take seriously and realize the idea of creating a national Airline for Ghana.

According to the MP, whiles the ruling government has failed to make any progress in reacquiring a national airline, the opposition NDC has found the need and has captured it in their manifesto going into the December polls.

“It is a disgrace to us. For this one, I am pleading with President Akufo-Addo, in our next term, a national airline should be acquired. Even Cote D’Ivoire, Togo and Burkina Faso all have national airlines,” he stated in a discussion on Net2 TV on Tuesday night.

The businessman mentioned that he is willing to invest $2.5 million in the state airline and called on President Akufo-Addo to ensure its establishment.

He faulted the PNDC government of former President Jerry John Rawlings for collapsing Ghana Airways which operated between 1958 and 2005.

“The reason I vowed never to board the Ghana Airways again is because there was a time we were coming home for Christmas. When we were going to board the plane, we were told the 31st December Women’s Movement was going to have a programme and some things they were importing had taken up space in the plane. The 31st December Women’s Movement, their things were packed on the plane leaving ours in the rain at the Kennedy Airport. Yes, I am telling you, they collapsed it,” he said.

Arguing with his co-panellist on the programme, the outspoken Member of Parliament told the Minister of Education, Dr Matthew Opoku Prempeh that the NPP government over the last four years has failed to reacquire a national airline for the country.

“All I am trying to say is we have been in power for the past four years. Do you think I will come and sit here every day and talk about only the good things you (NPP) have done, if it is not good I will tell you straight. It’s been four years since we came, we have been talking all these years and have not been able to acquire our own airline. We have been to Ethiopia and other places but yet there’s nothing to show,” he fumed.

The government of Nana Addo Dankwa Akufo-Addo has since its assumption of power indicated its commitment towards establishing a national airline carrier.

The Minister of Aviation, Mr Kofi Adda in a recent media engagement has revealed that the Economic Management Team and Cabinet will this week be deliberate on a shortlist of nine potential partners for the establishment of a home-based carrier.

According to the minister, government intends to hold only 10% interest in the new entity and invite private participation to manage the airline.

Irregularities cited in US$150 coronavirus test at Kotoka Airport