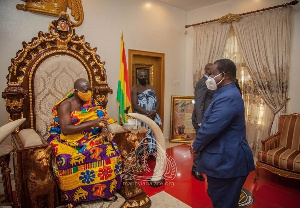 The Manhyia Palace reports that “the ex-president and his people trace their roots to Nsuta in the Ashanti Region and Asantehene is regarded as their overlord and they owe allegiance to the Golden Stool”.

The Asantehene, Otumfuo Osei Tutu II, has advised chiefs, particularly those in Asanteman, to resist the temptation of endorsing political party aspirants for Election 2020.

He said it was important that traditional rulers maintain the sanctity of the chieftaincy institution by doing away with partisan politics and instead maintain their neutrality.

Addressing the Ashanti Regional House of Chiefs (ARHC) at a general meeting in Kumasi, the Asantehene said chiefs remained the last resort for resolving conflicts in the country, and that if they were seen to be partisan, it would be difficult for anyone to seek their intervention when conflicts or disputes arose.

According to him, it was for a good reason that the Constitution precluded chiefs from partisan politics and explained that not all the people they presided over would belong to the parties the chiefs supported, for which reason there was the need for chiefs to remain neutral at all times and enjoy the support of their subjects.

While pointing out that chiefs had the right to vote in elections, he maintained that their choices should be known only to them and not openly display their political support.

Wives of deceased MPs who succeeded them in Parliament

Two dead after truck runs into traders at Walewale market