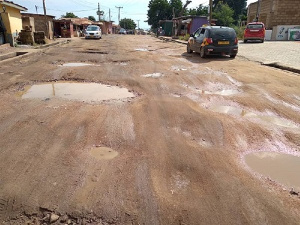 The deplorable road in the area

Commuters and passengers were on Monday stranded following a strike by commercial drivers, who ply the Festus-Amanfrom road in the Ga North Municipality, over the deplorable nature of the road.

Some affected residents of Festus, Amanfrom, SDA, Ga Odumasi, and Oshuman were seen walking long distances to other locations to pick vehicles to their destinations.

The Vice-Chair of Festus-Amanfrom branch of the Ghana Private Road Transport Union (GPRTU) of TUC, David Nyarko, in an interview with the Ghanaian Times, said the road had become deplorable following heavy rains.

“This is a serious matter; we cannot risks our lives driving through this manhole we call as a road, it becomes worse when the rain falls,” he said.

Mr. Nyarko said most of the drivers have subscribed to the “Work and Pay” service, and there was the need to maintain the car for the stipulated number of years.

“Majority of our drivers are doing what we call work and pay, where the cars are being bought for the drivers to work and eventually the drivers become owners, but due to poor road conditions most of these cars have been broken down,” he said.

According to Mr. Nyarko, the drivers spend their earnings on repairs of their cars, which has caused financial loss to them.

“So now we have decided not to sit down aloof and watch on, President Nana Ado said we should not be sectors so we have to take action now,” he said.

He said the grading of the road without tarring, had worsened the nature of the road, and called on the Member of Parliament for Trobu Constituency, Moses Anim, to as a matter of agency fix the road.

Israel Johnson, a driver, said the road had become dusty and bumpy which has affected the condition of cars.

“Almost every week we have to send our cars for maintenance, buy spare parts and a whole lot. It is very frustrating and disappointing,” he said

According to another driver, identified as Ibrahim, their decision to embark on the protest was as a result of the authorities’ refusal to fix the road.

A commuter, who pleaded anonymity, said she lost her three monthly old pregnancy due to the bad road network.

“I lost my pregnancy when I was on board on this bad road, the driver fell into a pothole, I was seated at the back so I felt a sharp pain, after some few minutes I started bleeding and that was the end of my pregnancy,” she said.

44 villages in Drobo State support the Anti-LGBTQI+ Bill, warns MP not to vote against it