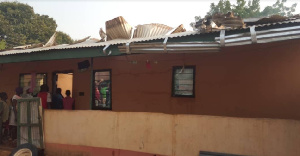 Fire has destroyed the Bungalow of the Yendi Church of Christ Health Centre in the Northern Region.

The four-bedroom bungalow with a hall, kitchen, bathrooms and store was destroyed on Friday when the Medical Officer was in the Health Centre attending to patients.

According to witnesses, the fire started with smoke and flames coming from the roof of the facility.

According to them, they raised an alarm and people rushed to put off the fire, but to no avail.

Afterwards, they were compelled to call the Ghana National Fire Service who arrived at a time the fire had destroyed the entire property.

The Medical Officer said he has lost an amount of 11,000.00, educational certificates, furniture, refrigerators and foodstuffs.

He added, prior to the incident, he was preparing for his wife’s passing out as Seamstress on Saturday 6th February 2021.

According to the Personnel of the Ghana National Fire Service, the fire might have been caused by power fluctuations in the Yendi Municipality.