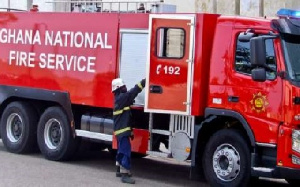 A storey building located at Adabraka, a suburb of Accra has been gutted by fire in the early hours of Monday, March 8.

The cause of the inferno is not yet known. Fire service personnel intervened to douse the fire and prevented it from spreading to other properties.

An eye witness told journalists that “I went to the house to load my prepaid and I saw smoke in one of the windows.

“We broke the door and saw that the room was full of smoke. Nobody was in the room.”

Previous Ghana wins ‘airport war’ with Britain
Next WATCH: Hajia Bintu Causes Stirs As She Drops Video Of ‘No Bra’