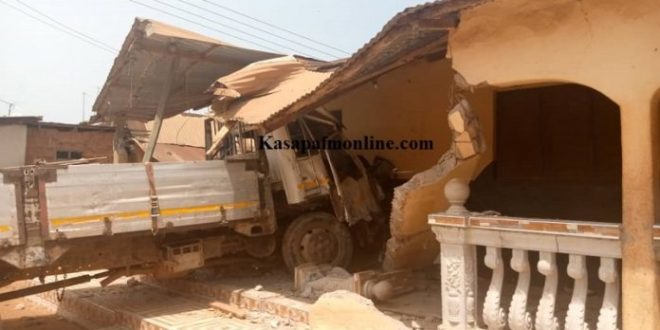 Five persons are struggling for their lives after a Kia Rhino truck crashed into a house at Agona Duakwa in the Agona East District of the Central Region Friday afternoon.

An eyewitness told Kasapa News Joseph Cobbina that the driver of the truck with registration number GS-837-Z was speeding from Agona Namawura heading towards Duakwa.

However, the truck failed its brake when the driver tried to apply it and in the process had no option than to ram into the house.

The five victims who were in the truck who sustained serious injuries were rushed to the Salvation Army Hospital at Agona Duakwa for treatment.

The accident caused huge damage to the house.

Police have commenced investigations into the accident.