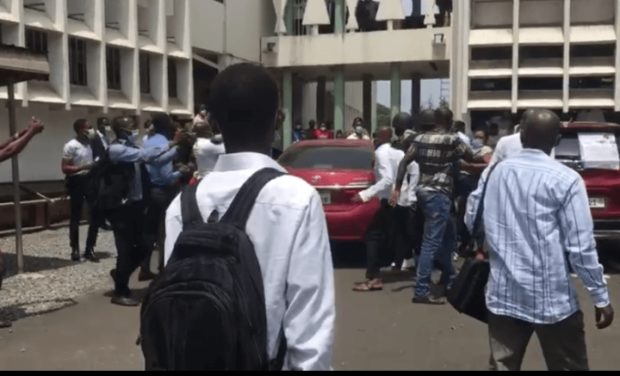 In videos available to this website, the Church members vehemently prevented media men who were at the court to take photos and videos.

They were heard shouting at media men and physically attacking them and destroying their recorders, cameras and phones which they were using to record proceedings.

Meanwhile, Rev. Isaac Owusu Bempah and four others has been denied bail by an Accra High Court on Monday, September 13, 2021.

This means the five persons will remain in Police custody.

Rev.Isaac Owusu Bempah together with four Junior Pastors were arrested by the Police after Owusu Bempah ordered an assault on Policemen who were at the Church premises to effect an arrest.

It could be remembered that the Man of God was seen in a video circulating on social media with his Junior Pastors who had stormed the residence of the converted fetish priest Nana Agradaa.

They were also seen in a separate video brandishing gun and boasting about the fact that nothing will happen to them should they kill someone in Ghana with their registered gun.