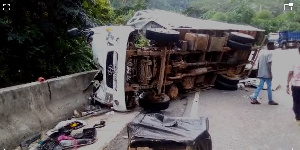 Four mourners including a child have died in a fatal accident on the Nkawkaw-Kwahu-Atibie road in the Eastern Region.

The deceased persons were reportedly carrying funeral logistics from Tease in Afram Plains South District heading towards Nkawkaw but the break of the Rhino truck they were onboard failed break while descending the Atibie mountain.

The truck somersaulted and crashed at the side of the road.

“We had Information that there was an accident on the Kwahu-Atibie road so we quickly rushed there. We saw a Kia Rhino carrying some things like chairs and funeral items. Our Preliminary investigation suggests that the accident was caused by brake failure. We can confirm that three males and a child died instantly. The rest have been rushed to the Atibie government hospital.

The deceased persons include the son of the late brother of Eastern Regional Secretary of ruling NPP whose thanksgiving and memorial service was held over the weekend at Tease, a community in the Afram Plains South District.