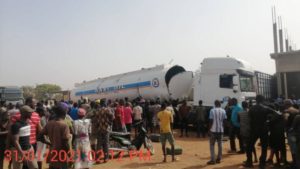 A petrol tanker exploded inside the Upper West Region capital, Wa, on Sunday, killing two people and injuring one other, according to media reports.

The deceased, 24-year-old Amidu and Issahaku, were working on leakages on the tanker at the Wa Magazine when the explosion occured, news portal myjoyonline.com reported.

It is not immediately clear what triggered the blast which occured while scores of workers were in their shops.

One of the victims was confirmed dead at the scene while the other was trapped in the tanker, alive.

Emergency services had to force their way through the the hot tanker to rescue the victim who was badly injured.

He was later confirmed dead at the Wa Municipal Hospital.

Boy, 14, crashed to death at Techiman