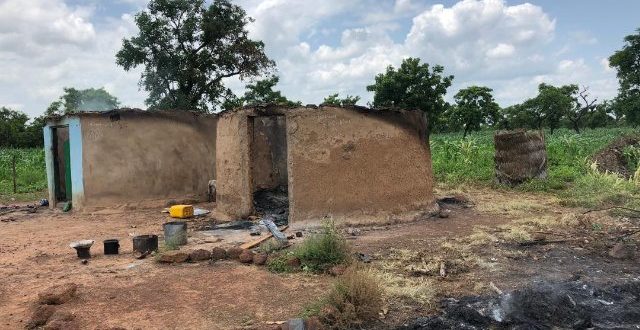 A powerful international welfare body for the Fulani ethnic group, Tabiltal Pulaaku, has dispatched its top officials in Ghana to a far-flung village in the Northern Region district of Kagara, after a local mob raided and destroyed a Fulani settlement.

This action which took place on Monday, followed a misunderstanding between settler farmers and the nomadic herders.

The confrontation over a damaged rice crop ensued on Friday, August 23, between a Fulani herder and a local farmer, at the village called  Bagurugu, when the farmer-led two others into the Fulani settlement and attacked the herder accused of allowing his cattle to enter the rice cropland.

The family of the attacked Fulani man also retaliated leaving two of the local attackers in a health care centre after sustaining bodily injuries.

The locals then mobilised on Saturday by sunrise and launched a reprisal on the herding camp which left a trail of overwhelmed destruction.

Over 30 houses, dozens of livestock, bags of stored food and personal belongings were completely burned to ashes when the mob overran the settlement in the unrestrained rampage.

Some of the Fulanis in the community whose houses and properties were destroyed were absent when the earlier confrontation occurred between their kinsman and the angry farmers.

Some of the herders who spoke to JoyNews said they were shocked and devastated by the attack. Some alleged the attackers were armed with guns and cutlasses.

This Fulani settlement is a bit isolated from the main Bagurugu village. Though the settlement has been in existence since 1960, there is no running water, electricity and other basic needs of livelihood.

Safura Musah, 45, suffered a broken hand when the mob came to burn her house. Once the mob met her standing outside, they attacked and beat her with sticks, she recounted.

According to her, she also lost over 45 wax prints and a total amount of GH1,300.

Another woman, Ayi Inusah said his family lost everything.

A 14-year-old boy, Yahaya Inusah, stated he escaped into the bush and stayed there until they finished the attack and left.

Zaliatu Alhassan wants the security agencies to look for the attackers, punish them and also do more to protect Fulanis in the area.

Fulani leaders shocked by the state of damage

In response, the Tabital Puluuka group which is headquartered in Mali and has branches in about 18 countries across America, Europe and Africa, quickly issued a condemnation, deployed officials to the ground to help in de-escalation process and also pressure up local authorities to take actions against the perpetrators.

Arriving in the village with some regional and grassroots elders of the Fulanis, national secretary of the group, Alhaji Yakubu Musah Barry, described the situation as “unfortunate” and  “disheartening”.

“It’s like a war just ended and we came there. About 35 houses burnt to ashes. These children, women, the house owners are helpless. In fact, I can’t even describe what I saw today; in my life, if not on television I have never seen such thing before,” Alhaji Barry said.

He also condemned what he found to be an unprovoked attack by the community mob and demanded from the district security council to take punitive actions against those behind it.

He added, “the security forces should pick up their tools and bring all those perpetrators to book so that it will be a deterrent to other people across the country. Because this thing not supposed to have happened in this country called Ghana.”

The General Secretary said the security agencies and both political and traditional leaders in the area have all promised to look into the matter and ensure justice is served.

At the chief palace, the delegation was received by the Chief of Tamalgu, Naa Yakubu Abdallah, who rendered an apology on behalf of the Bagurugu community and said the attack was regretful.

The chief later moved into the community with the delegation to inspect the level of damage. Relief items, however, were yet to arrive and the displaced herders were still sleeping under trees and in their damaged buildings.

Rising prosperity in Ghana’s semi-arid north, the poorest part of the West African country, has led to more people buying cows, drawing in more semi-nomadic herders who are hired to look after them.

Droughts and insecurity in Mali, Burkina Faso and Niger have driven more and more herders into Ghana but as agriculture expands and grazing for cattle becomes scarcer, the enmity between farmers and herders has intensified, with cows straying into crop-growing areas, leading to more frequent clashes and record deaths.

The Ghana National Association of Cattle Farmers (GNACF) recorded 104 deaths from farmer-herder clashes in 2017 alone. It was followed by 73 deaths in 2015.

Fulani herders are regarded as strangers in Ghana even if they were born in the country and are mostly shunned from villages to live in isolated camps with very few Fulani children going to school.