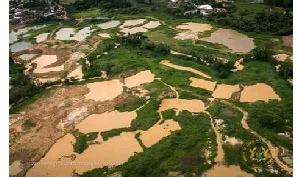 The Ghana Armed Forces has announced it’s military high command is embarking on confirmatory reconnaissance in areas of illegal mining under the Operation Halt II.

A statement issued by GAF said people are still engaging in illegal mining in areas they have cleared.

According to GAF, the illegal miners are engaging in the activities deep in the night or under the cover of darkness and protected by armed guards.

“These illegal activities were mostly being done in the night or under the cover of darkness protected by armed guards, as used cartridges were found at the sites. The Operation Halt II patrol that accompanies the team was ordered to destroy logistics found in these areas,” the statement added.