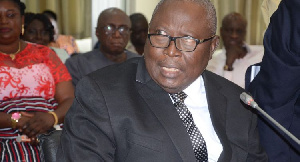 Special Prosecutor Mr Martin Amidu has said Charles Cromwell Nanabanyin Onuawonto Bissue, a presidential staffer and former Secretary to the Inter-Ministerial Committee on Illegal Mining, has not been cleared of corruption allegations levelled against him by investigative journalist Anas Aremeyaw Anas contrary to claims by the Criminal Investigation Department (CID) of the Ghana Police Service, which, according to Mr Amidu, had no jurisdiction of the matter.

The state-owned Daily Graphic newspaper reported on Monday, 22 July 2019 that after a four-month investigation by the CID following the Galamsey Fraud documentary which captured Mr. Bissue collecting various sums of money to allegedly bend the laws for some small-scale miners, the video was found not to have depicted the real situation.

Mr. Bissue was alleged to have taken a GHC35,000 bribe to help a make-believe mining firm ORR Resource Enterprise, circumvent all the necessary protocols pertaining to small-scale mining following the lifting of the ban imposed on such mining by the government.

In Anas’ undercover work, Mr. Bissue is captured on video issuing out orders to some subordinates on the phone to fast-track ORR’s acquisition of a pass despite the phoney company’s unworthiness.

However, the CID report said the documentary is not a true reflection of what transpired between Mr. Bissue and the representatives of the said ORR Resource Enterprise.

The CID also said Anas did not cooperate with the investigation by refusing to release the unedited videos of the incident as requested by the police.

Speaking in an interview with Accra-based Citi FM on Monday, however, Mr. Amidu said his office is still investigating Mr. Bissue, adding that he strongly protested the interference of the CID in the matter.

According to him, the CID Director-General, COP Maame Tiwaa Addo Danquah wrote back to him claiming she had been instructed by the Minister of Science, Environment, Technology, and Innovation, Prof Kwabena Frimpong Boateng; and the Minister for the Interior, Mr. Ambrose Dery to undertake the parallel investigation.

Below is Mr. Amidu’s narration:

We commenced investigations but before I could invite the suspect, I read a newspaper publication in which Charles Bissue said that the CID was investigating his case and that the complainant should go there and make their evidence. So, I wrote to the Director-General of the CID to tell her that the offences of corruption have been apportioned to the Office of the Special Prosecutor. We have been petitioned, we have indicated that we are going to begin investigations, there shouldn’t be duplicity of our efforts, so, she should stop it.

She writes to me to say she’s been instructed by the Minister of Environment, who is the Chairman of that organization [IMCIM] and the Ministry for the Interior to investigate. So, investigations continued.

He came for statement forms. He is to submit them. When all that is done – because the complainant and the suspects have all given evidence, the material which is the video is there, I don’t know what it says – [and] when we’ve gone through that process, we shall make a decision whether there’s a corruption offence committed or not.

So, the case is with us. I’ve told the CID that they don’t have jurisdiction. I’ve written to the Minister for the Interior, I’ve copied the Jubilee House, and said that we cannot concurrently investigate it. You either want to set up an office to investigate corruption or when it suits you, you send it to the police. So, the matter is being investigated by us. When the docket is brought up, we shall make a decision whether or not there’s a case to answer.

You can’t investigate a case when you haven’t heard both sides and this is not the first time this type of obstruction, which I’ve referred to in my write-up, is happening. People choose to interfere with my corruption investigations when they think it doesn’t suit them but we have to do a professional work – impartially. I have been brought here to do a job and that’s what I’m going to do.

And the police know that I’ve told them they can’t do it. And the Minister for the Interior knows that I’ve told him that for them to direct the police to do it is a political decision. If I’ve been set up to investigate without political direction, why will politicians send the case to the police when they know I’m supposed to handle it? We either want to set up the Office of the Special Prosecutor or we don’t.

I’ve told you I wrote to the Director-General, CID, that it wasn’t her jurisdiction. I’ve written to the Minister for the Interior. I’ve copied the Presidency. I wrote to the Chief of Staff to release Bissue, and I asked that” ‘Treat a crime as a crime, I don’t care who is involved’.

The point is, as far as I am concerned, the police have no jurisdiction in the matter, and no minister can refer cases which belong to me to them. The President said he was appointing me so that there won’t be political interference, so, why will a minister bypass me and refer a case to the police?

My investigators will handle it. When they are ready, they will give the dockets to us as prosecutors, we’ll assess it and we’ll make a decision. And then I’ll see who will stop me.