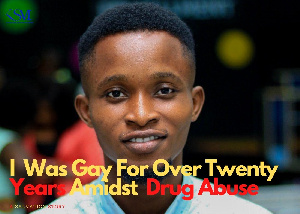 • A former gay has emerged to speak about his experience

It’s a testimony he has decided to share on as many platforms as he can get for the rest of his life – the story of how according to him, he was delivered from the grips of homosexuality.

For 20 years, Aaron Adjetey lived as a gay, hooking up with men in Ghana and around the world. Sharing his story on Joynews, he narrated that his ‘gay journey’ began at age 9 when he decided to explore his attraction towards males.

In the lower primary, about class 3 at the time, Mr. Adjetey explained that his first experience was with a classmate in his school.

“At the age of 9, I realized I was more attracted to guys not girls. The age of 9 was my first encounter but I’ve had that for the most part of my life. I decided to do ‘Mama ne dada’ with my classmate at the time,” he said.

After this, he progressed in the lifestyle through the Junior High School to the Senior High School. There, things became deeper. Aaron says he was introduced to dating sites where he could link up with other homosexuals and go on dates.

He told his mother who was not in support of his path that she ought to accept him the way he was because other parents have had to deal with children engaging in terrible vices like armed robbery.

Through this, he met a partner who was Greek and was ready to come down and marry him. That almost happened but he met Christ and through constant fellowship and encouragement, he quit.

“Whenever my mum asked, I told her, some people have their children as thieves, others do other things and this is what she got in a son so she should take it like that.

“After Junior High School, I went to SHS where I was introduced to dating sites, more like prostitution. You go on there, you put up your pictures and your profile, people send you dm and then you take it from there. And not only that, through that, you can get people here in Ghana who you can meet and have fun with. I was a nudist on Instagram.

“Through that, I met a white man in Greece who I nearly got married to. He was coming to marry me and take me to Greece and then I met Christ,” he said during an interview on Joynews.

Aaron has been straight for 3 years now. According to him, contrary to what many believe that it may be genetic and hormonal, it is a mere feeling which people can either choose to pursue or refrain from pursuing.

“Then comes the question of I was born with it, there’s nothing like that. It is either male or female, there’s no gay gene.

“Where I’m coming from, I can tell you there are masculine people who are always in the gym and they are gays. It’s just a feeling, it’s a choice. They are acting upon their feelings, just like I feel like eating rice then you go for rice but you can also decide not to.

“The Bible says that in sin we were conceived and, in another verse, it tells you some sins lead to death and this particular sin is against our morals. He said let us make man in our own image so we multiply, how can we multiply if you have a partner (male) how will the two will become one?” he quizzed

“But I’m out of it now, for 3 years now, I’m going around doing interviews as a living testimony to tell people you can come out of it,” he said.

Aaron Adjetey however urged for people to desist from physically attacking persons belonging to the LGBTQ+ community but rather find better ways of encouraging them to be able to quit. He gave an example of how he was attacked.

“I’ve been attacked before; I lost a tooth because of this same thing. I dance a lot so I was invited to parties and others, I was attacked not because I was caught in the act, it’s because I dressed like a girl, walk like a girl and dance like a girl.

“For that one it is not right, no one has to be attacked because they look like gays,” he added.

Source: www.ghanaweb.com
Related Topics:GAYmanquit
Up Next