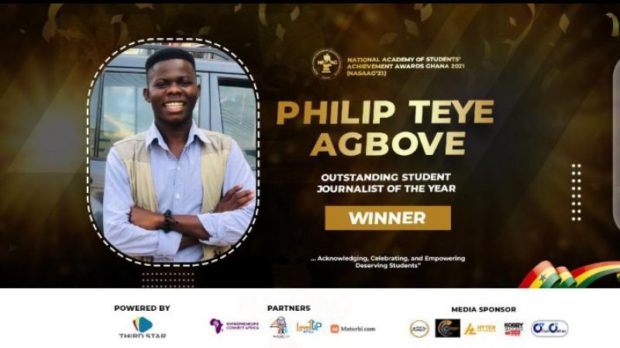 The award instituted by the National Academy of Students’ Achievement Awards Ghana, was organized by the Third Star Event to acknowledge, empower, and celebrate deserving students and other technocrats.
Some dignitaries including: Dr. Sheikh Osmanu Nuhu Sharubutu, the National Chief Imam, received Century Award in Promotion of Peace and Unity; Berlinder Addardey with TV3 and 3FM was honoured with Students/ Youth Role Model in Media of the Year; Dr. Yaw Osei Adutwum, Minister of Education, was awarded as Politician in Youth Education Development.

Others were the Reverend Father Anthony Afful- Broni, Former Vice Chancellor of University of Education — Winneba was honoured as the Industrious Principal/ Vice Chancellor of the Year; Dr. Daniel McKorley, Chief Executive Officer of MacDan Groups of Companies was given Students’ Supportive Entrepreneur/Philanthropists of the Year.
The rest: McDan Foundation winning Students’/Youth Supportive Organization of the year; Alswel Annan, Ambassador for London International Model United Nations and president of Private University Students Association of Ghana, was awarded with the National Youth/ Ambassador of the Year and many others.
Mr. Riffath Yakub Abubakar, President and Board Chairman of NASAAG, explained that the event was a platform to bring together all Tertiary Students in the country to celebrate and award the most hardworking and deserving students.

It was also used to recognize other stakeholders for their immense contributions and sacrifices towards education, entrepreneurship and leadership in the country.
Other students who won award were from University of Ghana, Kwame Nkrumah University of Science and Technology, GH Media School, University for Development Studies, Ghana Institute of Journalism, University for Education Winneba, and Central University.
Others includes Accra Technical University, Wisconsin University and others tertiary students.
Mr. Agbove, told the GNA that he had inspirations from many media personalities especially Umaru Sanda Amadu, a journalist with Citi FM.
“His story and current personality keep me going. Umaru has really suffered by combining education and herding cattle to get to where he is today and anytime, I flashback on his life account it gives me strength and hope to keep up with the race am running in quest to success,” he said.

He commended efforts made by, GNA, GH Media School, as well as the organizers of the National Academy of Students’ Achievement Awards Ghana and all who supported him saying, “I’m humbled”.
Mr Agbove said “I have no strength of my own, God has started it, I live the future in His mighty hands, because all the people who have made names in their various fields of preference and expertise didn’t get it on a silver platter”.

He called on the youth to put in much effort through persistence, perseverance, hard work, obedience and dedication in order to become whatever level they aspire to.
Some industrious personalities were given honorary awards for their great contribution to the development of the country in their various spheres.
Source: GNA
Related Topics:GH Mediaoutstanding student journaliststudentWINSYEAR
Up Next