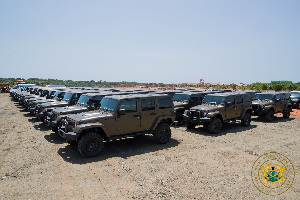 • The president also inspected work on some ongoing projects

The vehicles consisting of 40 Jeep J8 vehicles, 6 Toyota Hi-ace minibuses, and 14 Toyota Hilux pick-ups, according to the president, is to help the armed forces deal with the country’s internal security challenges, as well as threats posed by extremist groups operating along the northern borders of the country.

Following the presentation at Burma Camp in Accra, the president also inspected the Ghana Military Academy Infrastructure Upgrade project site, where he cut sod for its development on July 4, 2019.

“The Cadet Mess, the Square and lecture rooms are completed. The Administration Block is some ninety-five (95%) complete, and the contractor is in the final stages of completing the external works. The two hundred and forty-six (246) capacity Cadet Hostel and Platoon Commander’s Block are some sixty-five percent (65%) complete,” a statement shared on the president’s Facebook page read.

President Akufo-Addo also performed a sod-cutting ceremony for the commencement of work on a US$24.8 million housing project for Ghana’s troops.

The project which will be done in Accra, Kumasi and Sunyani when completed will add some 320 units to the housing stock of the Ghana Armed Forces.

“I also cut the sod for the commencement of work on the US$24.8 million housing project for the troops. Forty (40) half compound houses will be built here at Burma Camp, ten (10) each at the Naval Base in Sekondi, the Airforce Base in Tamale, the 4th Infantry Battalion in Kumasi, and the 3rd Infantry Battalion in Sunyani. When completed, a total of three hundred and twenty (320) units would be added to the housing stock of the Armed Forces,” the statement on the president’s page added.