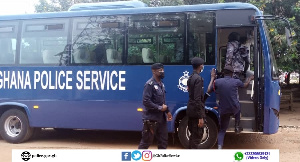 The Ghana Police Service in a bid to facilitate the movement of its officers to and from duty posts has introduced a shuttle service for personnel.

According to a statement by the police service, the shuttle service has already commenced in fifteen out of eighteen Police Operational Regions intending to ease commuting on officers.

The move is to also ensure that officers travelling to their duty do so in a safe condition.

“The Police Administration has, therefore, deployed buses on designated routes with pick-up and drop off points to ensure the safe and easy transportation of personnel, especially during the rush hour when movement along the roads is usually a struggle,” the police statement sighted by GhanaWeb notes.

Over the years, officers of the Ghana Police Service have had to either commute to their duty post using their private means of transport or join a public bus.

This has led to scenes where some officers are seen struggling with members of the public over cars especially during rush hours while wielding their weapons, a situation that poses a threat to the officers and the public.

The police service in announcing the newly introduced shuttle service acknowledged this situation while noting that it was a catalyst for moral within the service to dip.

The police administration has thus expressed hope that the new shuttle service for officers will address such concerns and ensure the safety of officers and members of the public while boosting officers moral.

“The Administration acknowledges that some members of the general public had expressed concern about the practice of police personnel boarding commercial vehicles with weapons and the possible danger posed to other occupants of these vehicles.

“The spectacle of uniformed officers struggling to get on board vehicles during the rush hour is not good for morale in the service and does not inspire public confidence in the police.

“The Administration is certain the shuttle service will reduce these concerns and ensure that both the police officers and the commuting public go about their duties in safety and dignity.

“It is also expected to give some respite to officers and further boost their morale for enhanced performance,” the statement said.