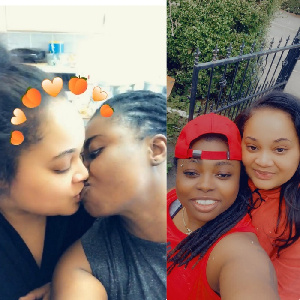 Ad
Popular Ghanaian lesbian DJ based in the UK, DJ Iyce has separated from her partner because of abuse.

The DJ according to Attractive Mustapha has moved out of her partner’s house and does not intend to come back to Ghana because the Ghanaian society frowns on LGBTQ+ and she has been exposed as a lesbian which puts her life in danger.

Early this year, her former boss whom she used to work with at Happy FM before leaving Ghana confessed that she had problems with her sexuality so he decided to sack her from work because he realized she was a lesbian.

Even though her partner is willing to accept her back and all plans were underway for their official marriage in October, DJ Iyce said she is not ready to go back to an abusive marriage as well as come back to Ghana where she has been exposed.

She is currently asking the United Kingdom government to protect and save her life.

Meanwhile, you can watch the latest episode of Bloggers’ Forum below.