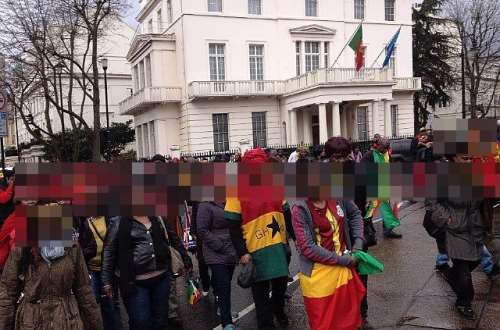 A demonstration was held on Monday, October 11, 2021, on the streets of California and New York in the United States of America in protest of the anti-LGBTQ+ bill currently before the parliament of Ghana.

The protest was led by some Ghanaians in New York and California with support from their allies.

The protest saw various rallies held in Harlem, New, New York and Oakland California over what the demonstrators described as a call to scrap the bill which they tagged as a “hate bill.”

A private members bill currently before the parliament of Ghana seeks to criminalize same-sex marriage and related LGBTQ+ activities in the country.

Dubbed “the Promotion of Proper Human Sexual Rights and Ghanaian Family Values,’ the bill was jointly submitted to the house on June 29, 2021, by a team of eight Members of Parliament.

Proponents of the bill want the promotion, advocacy, funding, and acts of homosexuality to be criminalized in Ghana.

In videos sighted by GhanaWeb, the protesters wielded several placards with various inscriptions while chanting against the passage of the bill into law.

“We demand equality in Ghana, Ghana’s hate bill has to go, Freedom and Justice is a lie”, were some of the chants sung by the protestors.

Some of the protestors also argued that the anti-LGBTQ+ bill if passed will lead to members of the community ultimately suffering torture and also endanger their lives.

“It would impede HIV and other health services for LGBTQI+ people. The bill would also require suspected LGBTQI+ people to recant their sexual and gender identities and pay for conversion therapy to avoid prison time,” the protesters said.

The protest on Monday is the latest of a series of international backlash that has met the attempt by Ghana’s Parliament to criminalize LGBTQ+ activities.

The bill currently before Parliament’s Constitutional, Legal, and Parliamentary Affairs Committee has so far received some 124 memoranda from the public.

While public support around the country keeps growing for the bill, a group of professionals including lawyers and academics have written to the committee raising concerns about the bill.

According to the group led by lawyer Akoto Ampaw, the bill threatens the human rights of persons within the LGBTQ+ community

VIDEO: My dad had sex with me – NDC guru’s daughter alleges

‘Disagree with us but don’t threaten anybody, we’ll not be gagged’ – Pro-LGBTQI+ bloc