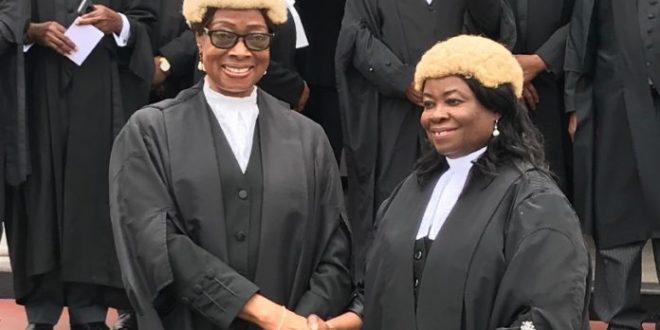 Retiring Justice of the Supreme Court, Justice Sophia Ophilia Adjeibea Adinyira, has called on Ghanaians to stop complaining about their present and past circumstances but rather commit to working diligently to improve their individual circumstances.

Speaking at the farewell ceremony at the Supreme Court after delivering her valedictory judgement after 42 years of public service as a public servant and a justice of the Supreme Court of Ghana, Justice Adinyira urged Ghanaians to stop complaining and talking about the good old days as presently there are better facilities in the area of health with low maternal and child mortality rates, better educational opportunities for all who care to study and improve themselves.

“Whatever your situation in life, do whatever you have to do with diligence and honesty. The real measure of life is the difference it makes,” Justice Adinyira admonished Ghanaians.

The retiring judge also had some words of exaltation for her colleagues she is leaving behind at Bench.

“To my fellow judges, my message is simple, keep to your judicial oath, case management and hold the lawyers to keep timelines,” Justice Adinyira said.

Justice Adinyira on Tuesday delivered her valedictory judgement in the case of the Centre for Juvenile Delinquency versus Ghana Revenue Authority and Two Others, as she bids farewell to the Bench after some thirty five years of service to Ghana.

Justice Adinyira was appointed to the Supreme Court on the 15th of March, 2006 during the presidency of John Agyekum Kufour and has served at the Apex Court of the land for thirteen (13) years. She exits the Bench as the third most senior Judge out the current number of fifteen. Among several other cases that she adjudicated, she was a member of the nine (9) member panel that heard and decided the famous “Election Petition” case of 2013. She will be remembered for her “no-nonsense” approach to the adjudication of cases particularly as a justice of the Supreme Court.

Justice Adinyira was born on 8th June, 1947. She had her legal training at the University of Ghana and the Ghana School of Law, and was called to the Ghana Bar in 1973. Her Ladyship Justice Adinyira worked at the Attorney General’s Department before being appointed to the High Court in 1989. She also served as a Judge of the United Nations Appeals Tribunal from July 2009 to June 2016, sitting in New York and Geneva. Adinyira is a member of the International Association of Women Judges and chairs the National Multi-sectoral Committee on Child Protection. She drafted a juvenile justice policy for Ghana supported by the Minister of Gender, Children and Social Protection and Unicef. She is also a member of the General Legal Counsel, the body responsible for legal education in Ghana.