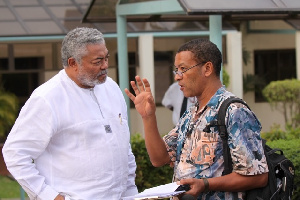 One of Ghana’s ace broadcasters, David Amanor, is taking a bow from the BBC after 20 years of working with the corporation.

David delighted audiences on the airwaves as a presenter and correspondent in Ghana for its Focus on Africa for many years.

Speaking with Bola Mosuro, the British Broadcasting Corporation’s Nigerian-born broadcaster, David Amonor, said his greatest experience in his career as a journalist was the five years he spent back home in Ghana, reporting on some of the major events that happened within the period.

“I did spend just about five years reporting from Ghana and there were big events,” he said.

During those years, David covered the African Cup of Nations which was held in Ghana in 2008, the December 7 general elections, as well as Barack Obama’s historic visit to the country as the first black American president.

Also, he had the honour of covering the celebration of the Asantehene Otumfuo Osei Tutu II’s 10th anniversary, during the same period, making it his best highlights as a journalist.

“The election that year was an extraordinary one. We went to three rounds unprecedented. There was also the coming of Obama the next year and there was the Asantehene’s 10th anniversary,” he said.

He also explained that some of the greatest experiences in his broadcasting and reporting career was when he told stories of ordinary people.

“The greatest pleasure in reporting from the ground was talking to people like the taxi drivers in Sakumono and market women in Makola… and all kinds of ordinary people just talking, just letting them lead the story. For me, that was the greatest experience,” he said.

For David Amanor, being the voice of the voiceless, was what he was good at, but in his over 20 years of reporting, he was never successful in interviewing the “big people” such as the presidents and First Ladies because those areas were not his comfort zones.

“Some people are good at different things. When we all work together it is because every member brings so much to the church, don’t they? They just bring their own kind of abilities. So, for example, our sister Veronica [Edwards] is very good at getting presidents and First Ladies and she can bring it down to our level. I couldn’t do that. I’m the kind of journalist who was not trying to chase big people I’ve never been successful at that. But I’ve always have found the more ordinary people whose voice is not heard,” he explained.

His reason for this, as he shared, was that the people in Ghana and Africa, in general, are approachable and easy to talk to.

“In a place like Ghana and much of Africa, people have been so receptive to the BBC over the years. So yeah, I think I prefer those kinds of interviews,” he said.

Besides, he said, the story of ordinary people is very inspiring, and he learns a lot about life and culture when they share their stories with him.

“Because I can come to them with a blank sheet. So, you tell me your story, and listen and say where this is going and very often Bola, as you know, you get so much surprised. You get nice surprises along the way they tell you about life and culture,” he said.

He joined the BBC World Service in 1998 as producer and presenter but his first experience of the BBC was a visit to a studio with his punky-reggae band.

Related Topics:bbcDAVID AMANOR
Up Next