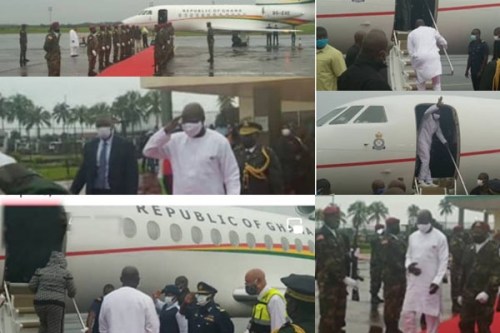 The terms and conditions surrounding the use of Ghana’s presidential jet by the Liberian leader, is not yet available.

It is also not clear, if Liberia has a presidential jet and what happened to it.

President Weah, was being seen off by his ministers at the Liberian airport this morning enroute to Ghana.

Recently, the NDC MP for North Tongue, Samuel Okudzeto Ablakwa, released details of another expensive jet rented by President Akufo-Addo to Germany and to the UK.

Oding the disuse of the official jet as suggested by Defense Minister, Dominic Nitiwul in Parliament in February this year.

The latest jet according to the MP, was chartered between US$18,000 and US$22,000 per hour if the Akufo-Addo government did not deal directly with the operators of the LX-DIO, based in Luxembourg.

However, if the government dealt directly with Global Jet Luxembourg, then Ghanaian taxpayers, must have paid at least US$14,000 per hour for the use of the airplane.

Pictures taken from the interior of the new aircraft, showed it has a shower, a movie room and a bedroom for President Akufo-Addo’s relaxation and entertainment, while airborne.

A worried Okudzeto Ablakwa, was forced to scream out “President Nana Addo Dankwa Akufo-Addo is unable to wean himself off his insatiable appetite for ultra-luxury charter jets at the expense of the struggling Ghanaian taxpayer”.

“If our government is dealing directly with the operators of the LX-DIO, then it is costing the Ghanaian taxpayer at least US$14,000 per hour. However, if our government is leasing the aircraft via brokers or middlemen as it has gained notoriety in many sectors, you shouldn’t be surprised that the Ghanaian taxpayer is being billed between US$18,000 and US$22,000 per hour”.

The MP from the Volta Region, who has been at the forefront of similar exposés, including Defense Minister Dominic Nitiwul being questioned on the renting of these expensive jets, insists Mr Akufo-Addo”..,remains totally impervious to the backlash and the outcry from Ghanaians demanding that he lives up to his own pledge to protect the public purse by utilizing the presidential jet which is a far cheaper and safer option.

PUMA kits for Black Stars, other national teams locked up at KIA