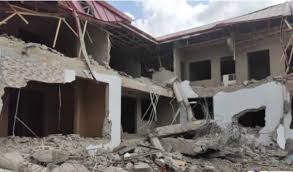 The Government Sunday condemning the alleged demolition living quarters being constructed by the Nigerian High Commission, announced that investigations into the alleged breach of the premises of the Commission, in Accra, had begun for the offenders to be brought to book.

A statement issued by the Ministry of Foreign Affairs and Regional Integration, and copied to the Ghana News Agency in Accra, said such acts breached the Vienna Convention on Diplomatic Relations (VCDR, 1961).

Consequently, the investigations would unravel the facts of the matter for the perpetrators to be brought to book.

Meanwhile, the statement said security at the said facility had been beefed up and the situation was under control.

It reassured the Diplomatic Community, particularly the Nigeria High Commission, that Ghana remained a law-abiding country, adding that, it was “committed to upholding the principle of the rule of law, where due process is followed at all times.

“The Government will, therefore, not relent on its primary obligation to guarantee the safety of Members of the Diplomatic Corps in Ghana”.

On Friday, June 19, 2020, some unidentified individuals allegedly breached the premises of the Commission, and demolished its property under construction around 2230 hours.

The building is earmarked to serve as a living quarters for some of its staff.

The security guards who were on the ground during the incident later told reporters the perpetrators said they were acting on behalf someone who claimed to have legal ownership of the land.