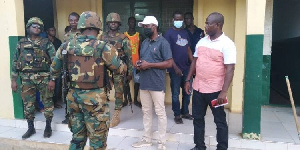 One person is feared dead with three others sustaining various degrees of gun shot wounds following a land dispute between two clans at Mpaha in the Central Gonja District of the Savannah Region Sunday morning.

The deceased, a male, is reported to have been hit by a bullet following a sporadic shooting between the aggrieved clans.

Some houses have also been torched.

Security personnel from the central Gonja District have since been deployed to the area.

Tv3 has also gathered residents are beginning to flee the town.