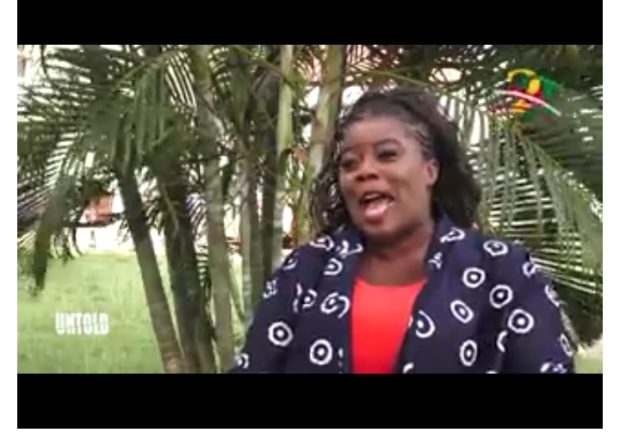 • Queen Esther was born into riches but got unlucky with love

A woman who was born into riches but was unlucky with love has explained that her wedding day was the worst day of her life.

Queen Esther Jackson, a cosmetic formulator and an entrepreneur, while sharing her story on The Untold on GhanaWeb TV, described the circumstances that led to how she met her ex-husband, and how other events led to her wedding day – the worst day of her life.

First, she explained how her childhood as an odd child felt like and why she always tried to fit in.

“So, at the age of 4, I was in Class One but still I looked taller and huge than the rest, so, I always had an intimidating figure and it made people want to use my intimidating figure against me by trying to bully me in a way but then if you get so angry and you attack back, you are the bad person, and if you relax too, they take advantage of you. So, I was in a confused stage from my childhood,” she said.

Queen Esther Jackson continued that she met a man playing the saxophone one day and immediately told herself she was going to marry him.

Without giving herself the time to know who she was intending to be with, she described what a mess she would get into.

“All along this time, I did not even know where he lived, what he does aside from his job as a Naval personnel, how his behaviour was, what he eats, how he eats, how he drinks, what he drinks; the only thing I knew was what he tells me at that short length of time,” she said.

She continued that, “We set the date, we were ready to get married. Wedding gown was ready, wedding cake was ready and I was ready to go to the salon to do my hair. So, in the salon, I remember I forgot my bag in his house so I went to his house to go and pick it up. When I got to the house, I had a call on my phone so I picked it up, in my excitement, I said Hello, Mrs-to-be, who is this?

“The person said, ‘My name is so so and so’ and immediately I was like, ‘Oh, hi, are you my husband’s sister? Are you coming for the wedding?’ and the girl was like, ‘What wedding?’ I said tomorrow, so why are you calling me? And she said, ‘I’ll call you back.’

“I said ok. I got my stuff got back to the salon when the call came again. I picked up the phone and she said, “I am not his sister, I am his girlfriend. We’ve been together since he left for Lebanon and he came back. And I got your number from his phone last night when I was sleeping next to him because I realized you were trying to call him and he was trying to hide the phone.

“She asked, ‘Are you Esther?’ and I said yes. And she told me that ‘What he told me was that you are certain woman he’s trying to lure to get a visa to travel.’ The shock was just unbearable but at that time, I had so much anger in me.

“I just started my car and in my mind, I was going to tell my mother that the wedding was off but when I got to the entrance of the house, I saw so much going on and at that moment, I just buried all my feelings and I took the feelings of what society and my family would say if I cancelled the wedding and that was the worst mistake of my life – that was my worst mistake.

Watch the full interview on GhanaWeb TV below:

Source: www.ghanaweb.com
Related Topics:WOMAN
Up Next