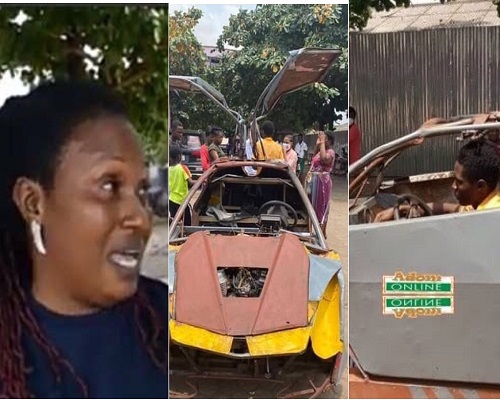 For the past week, the trending news was about a certain BECE graduate who is by name Kelvin Odartey and 18 years of age who just graduated from Cosmos International School who built his own private car from scraps as it’s been tagged as Ghana Lamborghini.

He drove his Lamborghini private car to School yesterday to write his final examination paper as it called for the masses attention with his innovative skills.

Meanwhile, Pinax TV was able to grant Kelvin Odartey an interview in his home together with his family in order for him to give more details over how he did his own car as such a young age as her mother also revealed how it all started.

According to his mother who is known as Maame Abigail, His son started to be innovative when he was in primary school. He was so much into toys whereby he also learnt how to use cans to make his own toys.

“My son started to do Air plane toys with cans but he later gave up and switched to cars because his plane couldn’t fly. Indeed I was against him because he never focused on his studies but was rather spending time doing this”. She lamented

“I never encouraged him because I didn’t not believe in the future of his dream due to how pessimistic I was. Even when he stared to do his Lamborghini with cans, I was mimicking him and nagging for him to focus more on his studies. But like joke, Kelvin proved me wrong and to be honest I shed tears after I see the car moving”. She averred.

“Now my son Kelvin Odartey has become a headline in Ghana and will surely make it if Ghanaians believe in him and support his dream. My husband is dead so I am the one taking care of him and his other two siblings”. She concluded

Her advise to parents was that, they should support their children in any positive talent they portray because book studies is not for everyone and technology is now ruling the world so if possible, they should let their wards enrolled in Technical Schools if they are good Technical.