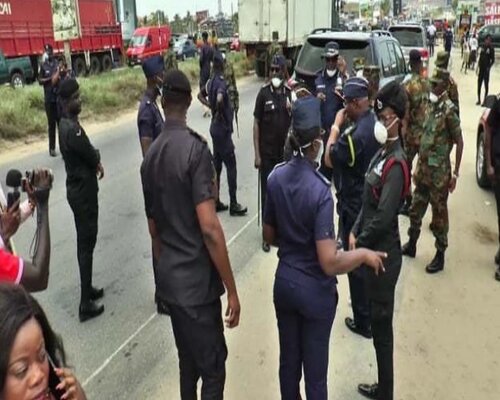 A soldier with Takoradi 2BN has narrated how six police officers pounced on him and beat him to a pulp in Cape Coast despite pulling out his “ID card to let them know I am one of them”.

The unfortunate incident occurred around 12:am on Saturday while the soldier identified as Sergeant K.k. was travelling on the Cape Coast Highway.

According to Adomonline.com, the victim asked his younger brother to pick him from home on his return from an assignment in Accra but the latter run into the police, who stopped to interrogate him.

The brutalized soldier narrated in an interview on Adom FM’s Dwaso Nsem show that misunderstanding ensued between his younger brother and the police officers, so he called him.

“When I got to the scene, I sought to find out what was going on and I pulled out my ID card to let them know I am one of them, hence should forgive my brother of any crime he might have committed.

“However, there was a heated argument and the next thing I knew, I was being attacked. One of them sprayed pepper spray into my eyes while the others attacked from all angles.

“They kicked me in my balls and I had my head hit with a wood and I began to bleed profusely while they tried to handcuff me with claims of taking me to a hospital in their car but I resisted and took a taxi which was nearby,” he added.

Sergeant K.k. said that the attack was so severe that he could barely walk now due to severe pain and a head injury.

One Dr. Vincent Sackey who is reported to be currently administering treatment to the victim in his home spoke on Adom FM’s Dwaso Nsem show and explained the extent of the injury inflicted on his client.

It is unclear if the matter has been reported to the police or military authorities and what has been done about it so far.

VIDEO: How ‘Angel’ Obinim turned into a cock to save a teacher from snake bite