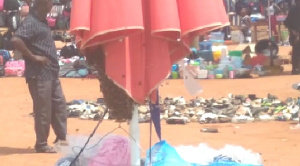 A swarm of bees found a new home as hundreds of them settled under the shed of a trader who deals in second-hand clothing at the Friday market in Jinijini, a farming community in the Brerekum West District.

Speaking to Rainbow Radio’s Abdul Razack, the trader disclosed that she had to flee her spot because the bees had taken over, and she was scared for her life.

The situation she said created fear and panic in the market as others who were closer had to flee.

According to her, she had earlier seen the bees on an electric poll but all of a sudden, she saw them on the umbrella she was to block the sun in the market.

She said she was sitting with another trader when the bees took over her spot.

An environmental officer in the area, Mrs. Madina, when contacted and asked if they could fumigate the area, said the chemical was harmful to the traders hence they could not at that material moment take that risk.

However, an insecticide trader is said to have intervened by spraying some of his chemicals on the bees.