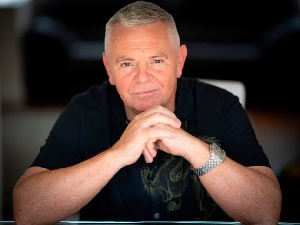 British actor, Phil Middlemiss has spoken up about how he got wrapped up in Ghana’s Airbus Scandal.

The former ‘Coronation Street’ star, who spoke to the Mirror UK recently, revealed that his woes began when he decided to pay a working visit to a British-Ghanaian in Ghana to explore locations and facilities for a film project he was working on in 2009.

He says the film was never made as investors pulled out but he developed a taste for entrepreneurship, starting the process for a drama school, performing school, glass factory and even a theme park.

Though he couldn’t succeed with most of his projects, he did earn a number of contacts from various government departments.

It was during this period, in 2010, that Airbus came to his team for assistance for the sale of their C-295 aircraft to Ghana.

“My role was to help the Airbus staff in the country to facilitate meetings, transport and arrange visas on arrival as they usually needed to travel at short notice. I would be paid on a commission basis following the successful sale of its planes.”

Phil insists that he neither received nor offered any illegal incentives during the period he worked for Airbus. He added that though his team visited the Airbus Headquarters in Paris, they covered the cost for their trip themselves due to the commission and the promise of work long term with Airbus.

“I never received one single penny and thank God I didn’t. As it goes they never offered it… We were doing it for a commission. When you are working with one of the biggest aviation companies in the world, you expect them to know what they are doing.”

In May 2020, Ghana declared the former coronation Street actor wanted over the £5 million Airbus scandal which involved some government officials, with former President John Mahama, being named in the deal.

Before this, however, Phil says, he received a letter from the UK Serious Fraud Office in 2019 for “a voluntary interview under caution to answer allegations of bribery and corruption.”

Ghana’s first Special Prosecutor, Martin Amidu, launched a probe in 2020 after the international investigation’s report was published. Phil and three others, one of whom is said to be the brother of former president John Dramani Mahama, were named as suspects.

“The actor has spent the past two years facing possible prosecution by the UK’s Serious Fraud Office in relation to allegations of bribery and corruption and the £50million sale of three C-295 military planes by global aerospace giant Airbus to the Ghanaian government”, The Mirror UK reports.

Though he was asked to come and assist with Ghana’s investigations, Phil decided against that as he didn’t want to get “involved and believes the allegations are baseless and politically motivated.”

Three months ago, Phil says, he received another letter from the SFO stating “following a review of the evidence he was not to be prosecuted for any offence.”

Former President John Dramani Mahamadominated the news in 2020 after Airbus, Europe’s largest aerospace giant admitted paying huge bribes to secure contracts in Ghana when he was the vice president and later president.

A London High Court found Airbus guilty, and imposed a fine of three billion pounds (£3bn) as penalties. Anti-corruption investigators, according to The Guardian, have described the court’s decision as the largest ever corporate fine for bribery in the world. A judge declared the corruption was “grave, pervasive and pernicious.”

The prosecutor stated in court: “Between July 1, 2011 and June 1, 2015, Airbus SE failed to prevent persons associated with Airbus SE from bribing others concerned with the purchase of military transport aircraft by the Government of Ghana, where the said bribery was intended to obtain or retain business or advantage in the conduct of business for Airbus SE”.

VIDEO: My Mum Has Slept With Almost All The Men In Our Area – 19-year-old Boy Cries For Help