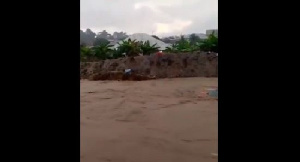 • A man believed to be a taxi driver, was stuck after his car was submerged in water

The bravery and timely intervention of two young men has resulted in the saving of the life of a certain desperate, near drowning man, in what is being described online as a heroic act.

In a video sighted on Twitter and shared by a tweep, @TheOnlyBKB, the man, seen in the middle of a fast-flowing water, believed to be from a heavy downpour, makes frantic efforts to escape the imminent danger he was in.

The incident is said to have happened at Ohwin in Kumasi.

“This happened at Ohwin in Kumasi; it rained heavily and this taxi driver’s car was virtually flooded to the level that he had to climb on top of it,” the tweet said.

With some onlookers on dry land unable to get to him without endangering their own lives, the desperate man attempted what seemed like a last try at jumping to safety.

Unfortunately, he fell right into the rushing, dirty water, immediately carrying him along with it.

That was when the young men did the craziest, bravest thing. One running ahead of the other, these two young men followed up on the man.

In almost split seconds, the first of the two threw himself to the ground, making it in time to get to the edge, enough to reach the hand of the drowning man.

He was immediately supported by the other young man, who by now, was also lying by him, easily helping bring up the drowning man.

Some Twitter users have been reacting to the video, calling the two heroes.

Here are some of them:

Related Topics:braveryyoung men
Up Next