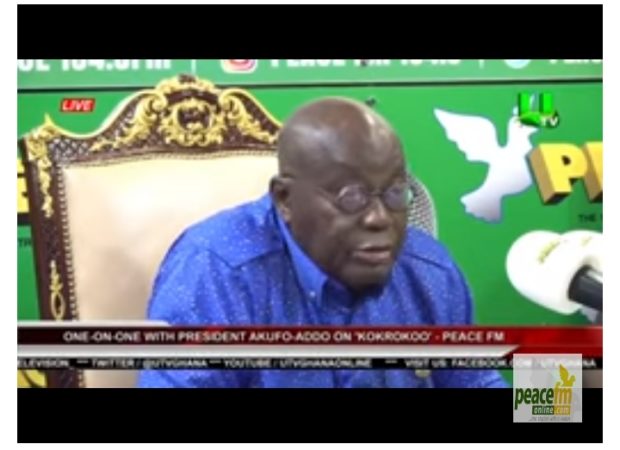 • He said he is human and not a superman

• He then apologised to the people of Cape Coast

President Nana Addo Dankwa Akufo-Addo, has admitted that he made a mistake with comments about a harbour for the people of Cape Coast.

The president, while on his two-day tour of the Central Region, told Cape Coast-based Eagle FM on Monday, October 18, that a decision to build a harbour in Cape Coast was never a part of the list of promises tabled before him for his second term.

Justifying his statement, President Akufo-Addo referenced Page 88 of the NPP’s 2020 Manifesto, dubbed Leadership of Service: Protecting our Progress, Transforming Ghana for All.

But speaking on Peace FM, Wednesday, October 21, 2021, he said presidents are humans and not supermen; because they make mistakes.

President Akufo-Addo used the opportunity to apologize to the people of Cape Coast.

He explained, “in looking at the manifesto – and I try to do that before I go – I saw one page which talks about the landing site but I did don’t go any further…

“Even with the mistake, we have to rethink a lot of things, we have a harbour in Elmina which is being developed right now, obviously Takoradi and Elmina and we another one projected for Cape Coast…I think some rethinking has to go on for us to be able to find value for money arrangement…”

“But it was a mistake and I have to apologise to the people of Cape Coast and the Central Region for that mistake. Presidents are human after all, we are not supermen. We make mistakes,” Akufo-Addo stressed.

Watch President Akufo-Addo in the interview below: