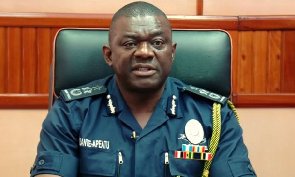 The Inspector General of Police (IGP), David Asante-Apeatu, has said it is “normal” for top police officers to resort to WhatsApp and SMS messages in communication.

He disclosed that he is even on the same page with all regional commanders and they communicate frequently.

The IGP was responding to questions at the Commission of Inquiry sitting looking into the Ayawaso West Wuogon by-election violence.

He appeared as a witness on Tuesday at the Christianborg Castle in Osu.

From previous sittings, it came out that the Accra Regional Commander sent a WhatsApp message to the East Legon Divisional Commander for an instruction to be carried out during the January 31, 2019 by-election.

Though the message was not replied, the regional commander expected the instruction to be carried out, nonetheless.

“It is normal,” IGP Asante-Apeatu emphasized.

Asked by prosecutor Eric Osei Mensah whether there will still be that record trail five years in the future, the nation’s topmost police officer said “these messages once we send culminate into documents”.

“But for immediate communication, we will rely on social media,” he said.

On the issues that led to the seeming security breakdown during the by-election, IGP Asante-Apeatu admitted that there was lack of coordination among the security agencies.

“Well, there is a lot of room for improvement as far as coordination and collaboration is concerned,” he stated.

He said he has extended a hand to some of his colleagues in the other security forces for a dialogue on coordination.

Though he said the gesture is not on authority, “I hope that we will present a paper in that direction”.