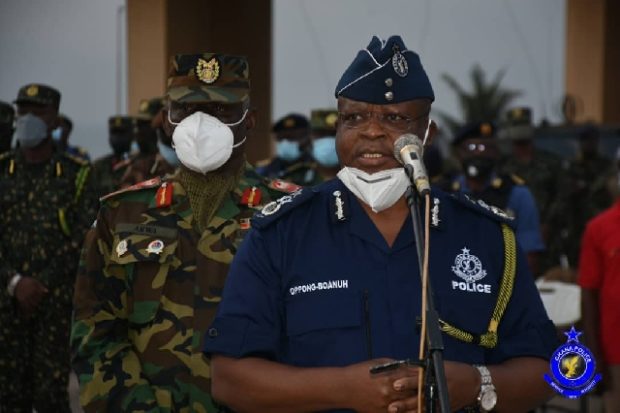 Information gathered by Mynewsghana indicates that the Inspector General of Police (IGP), James Oppong-Boanuh, has visited Pramkese in the Kwaebibirem Municipality of Eastern Region on Friday.

This visit stems from the recent armed robbery attack in the area which led to the killing of one policeman, Sergeant Moses Tetteh Nartey and the injuring of another police officer.

The IGP is said to have visited the community to commiserate with the bereaved family and to have a word with all who were affected by the robbery attack.

In an interview with the taxi driver who was with the police during the incident, Prince Amegavi (a.k.a Borga), many policemen with so many big cars and with motorcades stormed the place.

“They came to me and asked why I didn’t die after the many gunshots. I told them that I don’t really know but it is God who saved me. So they told me they would get back to me.

“There were a lot of people who were taking videos with cameras and phones while the person (IGP) was talking to me.

“They didn’t say anything about the car. They only spoke about the bullets on the car and then left with the assurance that they will be back to me,” he said.

Prince Amegavi testified that he saw the “big policeman” and his people invite the wife of the deceased into the station for interaction.