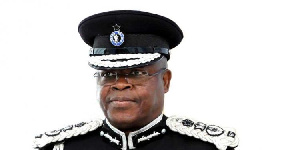 The acting Inspector-General of Police (IGP) James Oppong-Boanuh has said he is open to public opinion in shaping policies to make the police service an effective one.

He says, his administration will continue with programs started by his predecessor to ensure the highest professional standard such as capacity building, provision of logistics, continuous training, motivation and welfare of police officers.

The acting IGP said this at his maiden meeting with more than 200 senior police officers working within the police headquarters, Accra and Tema Regions at the national headquarters.

“I will operate an open-door policy where ideas from both senior and junior ranks as well as the public will be carefully considered to improve policing aimed at ensuring the safety of persons and properties in the country”, Mr Oppong-Boanuh noted.

He also told senior officers to show ‘positive attitudinal change in their interactions with colleagues, junior ranks and members of the public.”

While charging officers to undertake operations that will eradicate crime in their operational jurisdictions, Mr. Oppong-Boanuh directed commanders to undertake community engagements to boost public confidence in the Police, which is an essential component for effective policing.

The acting IGP also charged Commanders to focus on operational strategies towards curbing violent crimes in the country, especially with Accra and Tema.