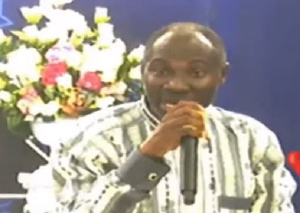 Founder of Glorious Ways International, Badu Kobi, is not ready to retract his statement regarding his stance on the characters traits of Asante women.

In a video sighted by YEN.com.gh, Badu Kobi was heard saying that he is ready to stand before Asantehene, Otumfuo Osei Tutu II, and he will prove to him that there is a bigger kingdom.

In one of Badu Kobi’s sermons, he took a strong swipe at Asante women.

According to the controversial man of God, women from the Ashanti Region are materialistic, disrespectful and money conscious.

Following his unguarded comments, Asante women who are traders, have vowed to drag Badu Kobi before the Asantehene.

Badu Kobi, in his response, looked unperturbed as he declared his readiness to defend his comments.

He said, “I am ready, I must stand before him and speak. And let us see who can challenge me.

“I will stand before him and prove to him there is a bigger kingdom.” Earlier, YEN.com.gh reported a story of Badu Kobi firing more shots at Asante women.

He stressed that Ewe women who are more beautiful are quiet while Asante women are attacking him.